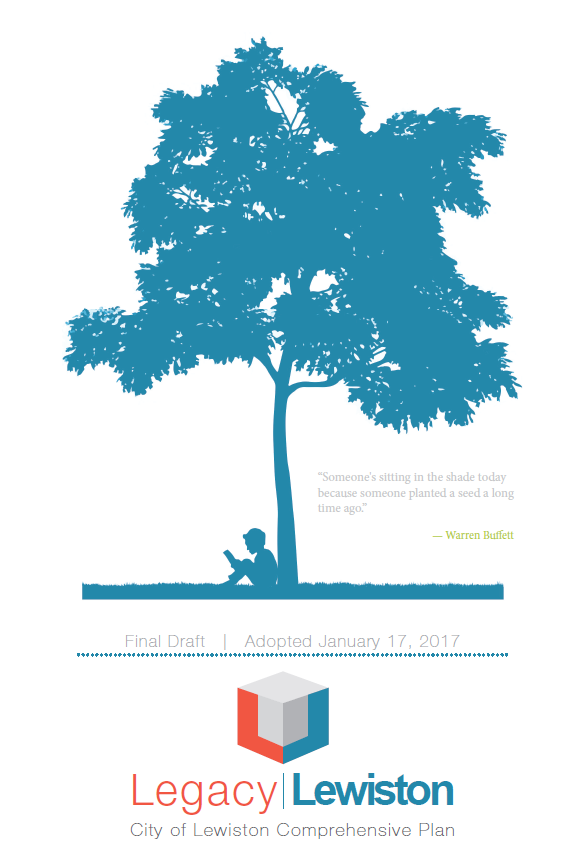 Lewiston’s Comprehensive Plan - Legacy Lewiston - is the result of many hours and months of work and contributions from residents, businesses, property owners, organizations, & city staff. The plan has been found to be consistent with the Maine Growth Management Act by the Maine Department of Agriculture, Conservation and Forestry and was adopted by the City Council on January 17, 2017. The previous plan, adopted in 1997, ceased to be consistent with MSRA Title 30-A and Chapter 208 of the State of Maine’s Comprehensive Plan Revision Criteria Rule at the end of 2012.

Legacy Lewiston is the foundation for determining effective public policy, master planning, and land use decisions for the future, and will provide an ongoing framework for informed and directed development. The comprehensive plan includes goals, objectives, and strategies and utilizes maps, graphs, and other imagery tools to analyze, assess, and recommend best practices for planning, economic development, housing, infrastructure, and other improvements. The responsibility of the plan is to reflect and respond to the priorities, values, and requirements of Lewiston’s residents, safeguarding the city’s history and sense of place while stimulating the conditions for short- and long-term needs & desires of Lewiston.

Special thanks to the following in helping the City develop this plan:

The following summarizes the planning and public participation process that occurred in effort to have the comprehensive plan adopted by the Planning Board, City Council and in obtaining a finding of consistency from the state. Legacy Lewiston Facebook was also used to provide updates on the plans progress and meetings.

January 17, 2017:The City Council adopted the comprehensive plan at their meeting on Tuesday, January 17, 2017. Staff had been working with the consultant Town Planning and Urban Design Collaborative, LLC (TPUDC) on making final revisions in response to comments and concerns shared by the Council during their review in 2016. The draft provided addressed those concerns, as well as the comments and suggestions of the Planning Board and community.

June 14, 2016:The City Council held a workshop on June 14th to review changes to the draft comprehensive plan recommended by the Planning Board and staff. Most of the changes in the plan were wordsmithing, correcting typos, etc.; however, there were some substantive changes recommended by the Board and staff. An additional Council workshop was held to continue their review, followed by a public hearing at which the Council was scheduled to adopt the plan.

May 3, 2016:The City Council held a public hearing on the City’s proposed new comprehensive plan, Legacy Lewiston, on Tuesday, May 3, 2016. The draft provided for review included the Planning Boards proposed revisions and comments.

February 22, 2016: The Lewiston Planning Board held a hearing on Monday, February 22, 2016 to receive input and provide a recommendation for the City Council’s consideration adoption of a new comprehensive plan - Legacy Lewiston - for the City of Lewiston. The Board reviewed their final revisions, as well as comments from the public, and provided unanimous recommendation to the Council for adoption of the plan.

November 10, 2016: At the request of City Council, a joint workshop with the Planning Board was held for staff and the Planning Board to provide an update on the status of the draft comprehensive plan. At that time, the Board was continuing with their review, making note of their changes and recommendations to present their recommendation to the City Council for adoption of the Plan.

September 11, 2015: After over five months of public meetings, the Planning Board completed their review of the draft comprehensive plan, with their recommendations posted online. Having spent many hours reviewing the document, the Board recommended well over 200 changes. Some are simple typos while others are of more substance. The Board would be continuing to review these changes and hold a joint workshop with the City Council.

March -July 2015: The City and TPUDC completed a revised draft that was made available for public review. This version took into consideration the comments and suggestions provided by city staff, committees, and the public. A copy for viewing was also available at the Lewiston Public Library and City Hall.

The Planning Board held public hearings to review and provide a recommendation to the City Council for the adoption of a new comprehensive plan. Given the length of the document, hearings were broken into specific sections. This assisted in keeping discussions to a manageable length and allowed the public to attend sessions that were of particular interest to them.

- A PLACE OF DIVERSITY AND CHANGE p.8

-THE FOUR FACES OF LEWISTON p.9

- COMMUNITY CHARACTER and LAND USE p.32

Winter/Spring 2015: After a well-attended public meeting held in November and upon receipt of comments through December, city staff and TPUDC worked to provide a revised draft incorporating the community’s comments and recommendations. The plan was delivered to the State so that they could complete their review in hopes of providing a finding of completeness and consistency with the Growth Management Act of the State of Maine.

October 2014: This was an internal review period, where public comments were consolidated into common themes and subject matters for review by staff and consultant/TPUDC. An update was provided to the Comprehensive Plan/Think Tank Committee by early/mid-October

June 20-25, 2013: Great Community Input Occurred! Lewiston's Planapalooza: It was an intense, participatory design and public input process where all members of the community worked directly with a multi-disciplinary consulting team. The entire process was open to the public at all times. The city has engaged the services of Town Planning and Urban Design Collaborative, LLC (TPUDC) to assist in drafting a plan for adoption by the City Council and for a finding of consistency by the State.