DO YOU NEED SAND?

If you are a Lewiston resident & need sand, you may go to 195 River Road, Lewiston with a shovel (one may be on site) and two empty five-gallon buckets.  Sand is self-serve from 7:00 am to 2:30 pm Monday – Friday except for holidays. If the gates are open on the weekends, that means Public Works is treating the roads, and residents may help themselves to the two-bucket limit per visit.

An Important Message about Winter Storm Operations, Including Snow Plowing, Sanding and Salting, and Snow Removal From the Lewiston Department of Public Works.

During the winter months, the Department of Public Works prides itself on providing safe and effective driving conditions for all of Lewiston’s residents.

An effective transportation system is key to economic development, and clear roads are the goal. Additionally, snow and ice control is a public safety concern as police, fire and ambulances need to be able to reach places where their services are urgently needed. The department treats snow and ice storms as emergency conditions.

The following information is designed to enhance your knowledge and understanding of winter conditions and procedures. Winter can be trying for motorists; thus, it is important to know how snow plowing and removal will be carried out.

I hope you will find the following information helpful and informative. Please drive carefully.

WHEN THE SNOWFALL STARTS

An important step in dealing with snowfall is sanding/salting of streets. Top priority is given to the City’s main routes. These routes are streets that the City has found to have the heaviest year-round traffic and usually are major arterials such as Main Street, Sabattus Street, Lisbon Street, and East Avenue.  Along with the major arterials which receive top priority are the areas which cross or are adjacent to bodies of water and areas where large hills are located. Examples are all bridges over the Androscoggin River and the canal and areas such as Lincoln Street and No Name Pond Road

The application of sand/salt begins when frozen precipitation begins to fall. All operations begin by sanding/salting the streets and continue until all the streets are clear or until it is no longer effective due to the depth of snow. Salt keeps the snow from bonding to the pavement and allows for cleaner plowing. An average of 200 tons of salt is used for each plowable storm in Lewiston.

WHEN THE SNOWFALL CONTINUES

When two to three inches of snow have accumulated and more is expected, snow is more economically removed by plowing rather than sanding/salting. All public roads, main arterials, as well as residential streets, may be plowed by Public Work’s personnel. Our first responsibility is to open the main arterials and other heavily traveled areas. The arterials are key to maintaining a steady flow of traffic.

The units assigned to plow main arterials are the first to be called. Each storm is different and presents a challenge that can be very difficult to handle. Such things as temperature, time of day, traffic conditions, rate of snowfall, and texture of snow are just a few factors affecting the impact of a storm in Lewiston.

The amount of snowfall alone can be deceptive. For instance, a small storm during a weekday rush hour can cause major problems, while an equivalent storm on the weekend or late at night may cause little trouble. Light snow and heavy winds will cause continual drifting and ice build-up. Heavy wet snow will bring down trees and wires and cause additional equipment strain. Snow turning to rain will cause low areas to flood requiring immediate attention to eliminate further problems. Trained crews take pride in clearing the City’s streets and are dedicated to performing in a professional manner. Once a storm has ended, it takes approximately six to eight hours to complete the snow plowing of Lewiston’s 188 miles of road.

Snow removal is the act of physically removing the accumulated snow which has been plowed to the edge of the roadway and disposing of it in a designated snow dump site. Snow removal is performed in hazardous areas first. “Little Canada,” lower Lisbon Street (from Adams Avenue to Main Street) and Main Street from Longley Bridge to Central Maine Medical Center are first to be addressed. 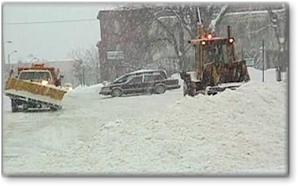 All streets which are equipped with parking meters are next to be cleared. From there, the crews work their way throughout the heart of the City and may skip over to more congested areas. This service is performed in downtown areas during late evening and early morning hours when parking is not permitted and traffic is at its lowest point. Other areas are done during the day. During the course of the winter, it may become necessary to divide the work force into two shifts and perform this service both day and night. This type of scheduling adds additional strain to personnel as well as to the equipment but is necessary to provide safe and efficient conditions.

Other services which are performed by the Lewiston Public Works Department are: 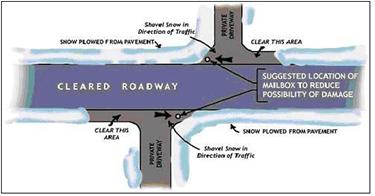 Our goal is to remove snow and ice from the roadway as rapidly and efficiently as possible to enable mobility and safe driving conditions.

Here are some ways that you as a resident can help to make a winter storm even easier on both yourself and on the Public Works crews: